Airplane etiquette is so important because today, airplane space is smaller and there are more people crammed into tiny spaces. I am not only a blogger, but I’m also a flight attendant. I love my career, but sometimes I wish more people were aware of simple airplane etiquette.

Stow carry on items, put up your tray table, and put your seat back forward for take off and landing.

Flight attendants are not trying to be jerks when they come through the cabin doing their safety checks. The reason they ask you to do those things is in case of evacuation. If you have things by your feet, or a tray table down, or a seat back, you will lose valuable time in case of an evacuation. Speaking of evacuations, in case of one, leave all carry on items behind. If you bring your crap, the seconds you take can mean the difference between life and death for the people behind you.

Lets face it, when flying, no one wants the middle seat.

But, if everyone followed middle seat airplane etiquette the middle seat wouldn’t be half bad. The arm rests are for the middle seat, period. The middle seat is a rough place to have to sit when you have a stranger on each side of you. It’s even worse when those strangers take the armrests and you are stuck with no place to go. If you are at the window or the aisle, you can lean away from the person in the middle and for the love of Pete, let them have the armrest.

When boarding, step into the aisle and let other people pass behind you.

Everyone is in a rush to get onto the airplane and get to their destination. Not only that, the airlines compete for on time bonuses, so by getting into your seat quickly you will help the flight be on time.

Airplane Etiquette Tip – If you put your little travel essentials into a separate bag you won’t need to be up in the overhead bin every five minutes trying to find your must haves. For me, my must haves are headphones, phone, phone charger, wallet, blanket, snack, and my fan. Link my other post. Everything is in one place and ready to put into my seat back pocket for easy access.

Keep your feet, knees and elbows out of the aisle.

When it’s time to deplane, deplaning airplane etiquette is when you go from left to right, front to back. Don’t rush up in front of people because you are more important than them. Here’s a secret for you, no one person is more important than the next. The exception to this rule? If someone has a tight connection, and an announcement has been made to let those with a tight connection deplane first.

Don’t rush up into first class to use the lavatory like you own it.

There are certain rules in place, and if the cart is out in the isle, yes, you may use the first class lavatory, but be polite and ask. People pay a lot of money for first class seats, and as part of that price they get to have their own lavatory. For security reasons, the lavatory up front is reserved for first class passengers.

When you are finished in the lavatory, wipe down the sink for the next person. Who wants to get a wet elbow from used sink water? Certainly not me.

Take out your headphones.

When the flight attendant gets to your seat to take your drink order, be polite and take out your headphones and answer. Contrary to what many people think, there are more people on the airplane than just you.

Speaking of headphones, no one wants to hear what your kid is watching on their tablet or that game you are playing. Use headphones whenever you or your children are using electronic devices. I’m on an airplane right now typing this blog post and the person behind me is playing a game without headphones and seriously annoying me.

I know, it is super inconvenient to have to use the lavatory and you are stuck waiting until after the seat belt sign is turned off. That’s why, use the lavatory or take your kids whether they or you have to go or not. On one particular flight, a gentleman was taking his one year old baby to change a diaper, this was after the captain told the flight attendants to be seated. As he got up with the baby, I did something I never did before, I started screaming at him “Sit down right now! Sit down right now! Sit down!!!” I think I scared him because he sat back down. Seconds later we hit turbulence so hard that I would have hit the ceiling had I not been strapped safely into my jump seat.

When we landed, I apologized to the man for screaming at him. He actually thanked me, because he realized had I not, he and the baby would not have been safe. I really don’t know what would have happened to him and the baby had he not listened to me.

Some airplane etiquette is safety related, and some is just convenience.

Like ordering coffee. If you say you want coffee, let the flight attendant known how you take it. Do you want cream? Sugar? How many? I know it may not seem like a big deal, but to have to ask that same question maybe one hundred times in a single flight takes up a lot of time.

If you vomit, do not hand the bag of vomit to anyone.

Throw the vomit bag into the trash or ask for another trash bag to put it under your seat, and tell the flight crew where the vomit is so it can be removed by the cleaning crew. I have had someone jam a bag of steaming vomit into my hand. Disgusting. I will help you and clean up your vomit, but dammit don’t hand me vomit unaware!

You wouldn’t think I would have to write this one either, but trust me, I do.  If you poop on the floor of the airplane, pick it up.  The end.

Only urinate in the toilet of the lavatory.

Would you believe I had a person ask me for a blanket because she peed on herself? That in itself wasn’t so bad. But why she peed on herself was. She was seated at the window and the couple next to her was sleeping. She didn’t want to wake them so she peed into her empty cup. Somehow she thought pulling her pants down and peeing into a small cup was better than waking the couple next to her. Of course it didn’t work out. You can believe she would have handed me the cup without explanation when I came by to pick up trash. The only tip-off I would have had that it wasn’t apple juice would have been that it was hot.

Keep your feet off of people and their bags.

Even if your feet are clean, keep them off of other people. I have had people put their feet on my bag, when I was in the middle seat, the person next to me thought he needed more leg room and put his feet onto my bag that was under the seat in front of me. Not only is it rude, but I don’t know where your feet have been, and this was an expensive bag! One day some lady from the seat behind me dug her toenails into my arm. Simple airplane etiquette would have saved me a lot of hassle.

Close the overhead bin after you open it.

So many people are always up digging into the overhead bin in-flight. I have been guilty of this a time or two, but I always close the bin when I’m finished. I have seen someone leave a bin open, we hit turbulence and a bag came down and broke a man’s nose. The bins close for a reason.

Please don’t slam the bins, it’s loud and rude. Treat the bins like a lady, gently shut them and you won’t wake people who are sleeping or disrupt your fellow travelers.

When the seat in front of you has a touch screen, touch softly. The screen most likely has a head in front of it.

Please don’t ask the flight attendants to warm up the cabin because you forgot your jacket.

Unless it is so unbearably cold leave the temperature alone. A warm cabin is not good, it causes nausea, dehydration, so you and everyone else have to drink more and use the lavatory more which makes the lavatory dirtier and dirtier. So when flying bring a jacket and a blanket. It certainly wouldn’t hurt to bring a scarf with you on the airplane either. If you keep your neck and head warm you will be much more comfortable.

Be clean when you travel.

There is not much worse than sitting next to the smelly person on the plane. The smell multiplies with a warm airplane. I’m all about not being smelly. I keep little sneaker balls in my shoes, I shower daily, I use powder and body spray to keep myself fresh. I brush my teeth twice a day, and always carry breath mints. I don’t really expect everyone to be as meticulous as me, but it would be nice.

I made a friend at the airport recently. We bonded over someone with really smelly feet. Before my new friend came up to me, I kept smelling feet. I got out my essential oils, I started spraying my feet with shoe pourri, I checked my shoe balls, they were still working, I sprayed my alcohol, and even some perfume. I kept smelling this horrible feet smell, and there were only two other people near by and they were pretty far away.

I was so self-conscious wondering how on earth I could stink so bad. I know I take all kinds of precautions, but it had to be me. So my now friend (who was a stranger at the time) walks up to me and says “Do you smell something strange?” I said, “You saw me using these oils, are you saying I stink?” I was horrified. She said, “No, it’s coming from over there and it smells like feet.” She asked if I had anything for the smell, and I got out my arsenal and freshened up the room. This girl was sleeping with her shoes off and stinking up the room from 30 feet away! I was almost going to take one for the team and drop my shoe balls into her shoes. I sprayed the area with alcohol and my new friend and I were able to finally relax.

Treat others the way you would like to be treated.

The last few things I would like to add to this airplane etiquette list is to use kind words with others.

Do you have any airplane etiquette tips that you would like to add? Was there a time you were flying and were subject to someone who could have benefited from using a little of their own airplane etiquette? Let me know in the comments, I would love to hear from you. 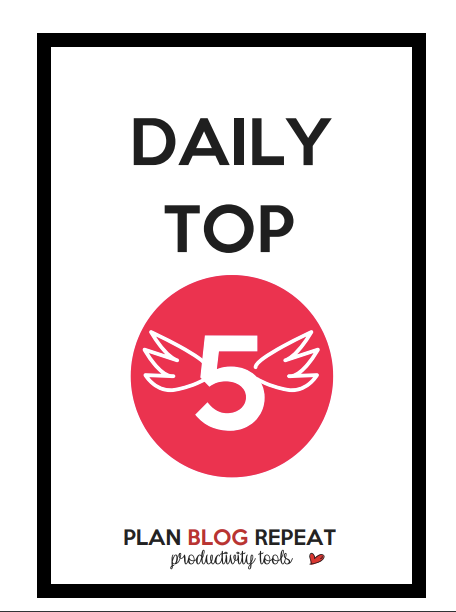 With Plan Blog Repeat's Productivity Tools - My Daily Top 5 will not only be your top 5 to do's but your Top 5 success Habits you can follow every day.

Get My Wordpress Theme